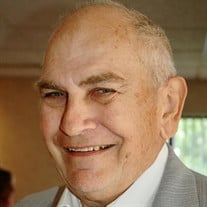 William Howard Sommerville, 86, of Barboursville, died Tuesday, November 11 in St. Mary’s Medical Center. He was born in Lost Creek, WV on May 3, 1935, to the late Howard Hoy and Elizabeth Ruth McDowell Sommerville. Preceding him in death were his three sisters, Frances Harmon, Betty Jo Kimble, and Ruth Ann Townsend. He is survived by his loving wife of 65 years, Freda Jean Chafin Sommerville, as well as his daughter Debbie (Bill) Sheils of Huntington WV, and his son Chuck (Jennifer) Sommerville of Folsom, CA. He was the proud Poppaw to four grandchildren and four great-grandchildren; Mark and Paul Sommerville of Folsom, CA; Sarah (Hilton) Hastings of Barboursville, WV, and their sons Benjamin and Jacob Hastings, and Allison (Adam) Kays of Huntington, WV, and their children Eliza and Owen Kays. Bill studied at Marshall University, then began his career at IBM as a service technician. After 35 years with the company, he took an early retirement, allowing him to serve as a loving caretaker for his mother-in-law Lucy Chafin, as her health declined. As a devoted Christian, Bill was a longtime member of Fifth Avenue Baptist Church, where he was a member of the choir and the Homebuilders Sunday School class. The relationship between Bill and his wife, “Miss Freda,” as he often called her, began when they were both teenagers, and fell in “love at first sight.” For the next 65 years, they enjoyed camping, square dancing, and other travels together, and were just as crazy about each other as they were the day they met. Bill was affectionately known as a jack of all trades, and could fix nearly anything. He was always willing to jump in and help in a moment’s notice, and was eager to help his kids and grandkids with an untold number of projects over the years. He and his son Chuck built one of the first Apple computers, using parts they had purchased from the garage of Steve Wozniak himself. Poppaw Bill spent countless weekends behind the wheel, generously volunteering to tow his granddaughter Sarah’s horse trailer to horse shows over several years of competitive riding. He and Miss Freda frequently looked back on those years, grateful for the memories made. Few things brought Bill more enjoyment than the hours he spent flying radio controlled airplanes, as well as using one of the very first 3D printers to build custom planes of his own. This hobby ultimately led Bill to make two very special friends, Paul Harmon and Henry Link, whom he met as a member of the Ona RC Club. Bill was always interested in new technology, and at 83 years old he bought his prized Tesla Model 3. He loved to talk to anyone who would listen about his car and all things Tesla, and was always excited about the technological possibilities of the future. One of Bill’s favorite sayings was “Growing old is mandatory, but growing up is optional,” a sentiment he embodied until his final days. We already miss him terribly, but we look forward in faith to the day when we’re reunited with him in heaven. Funeral service will be conducted Wednesday, November 17, 2021 at 1 pm at Henson Kitchen Mortuary, 6357 E. Pea Ridge Rd. Huntington, with Rev. Eric Porterfield officiating. Burial will follow at Woodmere Memorial Park, Huntington. Friends may call from 11 am to 1 pm prior to the service at the funeral home. Online condolences and memories may be shared with the family by visiting www.hensonandkitchen.com

William Howard Sommerville, 86, of Barboursville, died Tuesday, November 11 in St. Mary&#8217;s Medical Center. He was born in Lost Creek, WV on May 3, 1935, to the late Howard Hoy and Elizabeth Ruth McDowell Sommerville. Preceding him in death... View Obituary & Service Information

The family of William Howard Sommerville created this Life Tributes page to make it easy to share your memories.

Send flowers to the Sommerville family.