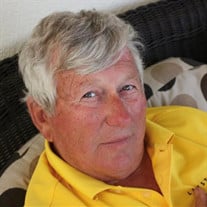 Walter E. Smith, 83, of Ona, WV, passed away on October 16, 2021 after a battle with heart and kidney disease. Walt was born November 24, 1937 in Paris, TN, the son of Murray and Minnie Smith. He graduated from Henry High School in 1956 and married his high school sweetheart, Peggy Ann Stahlman on September 30 that same year. He began his career with Lorillard Tobacco Company in 1962, living in Paducah, KY, Louisville, KY, and transferred to Huntington, WV as a Division Sales Manager in 1971. Walt and Peggy were married 38 years before her death in 1995. Together, they had two loving daughters, Sherry and Shelia. He later married Kim Nichols Groom in 2001. He always said he was so lucky to have two great loves in one lifetime. Walt retired in 2006. In his retirement, he enjoyed golfing at Riviera Golf Club, frequent beach vacations, and cheering for Marshall Football and Kentucky basketball. In his lifetime, he owned eight Corvettes, some for car shows and some for Sunday drives. He is preceded in death by his parents, wife Peggy, sister Mary Margaret Lowe, and grandson Keith Randall (Rocky) Nicholas II. He is survived by wife Kim, daughters Sherry (Steve) Morgan and Shelia Kessel both of Hickory, NC, stepchildren he loved as his own, Kerith (Andy) Richards and Kramer Groom both of Ona, WV, grandchildren Richie Nicholas of Denver, NC, Luke Kessel of Nashville, TN, Rachel Kessel of Boiling Springs, SC, and Julia Kessel of Chapel Hill, NC; great grandchildren, Graceyn, Kendall, Jaxson, and Harper Nicholas; as well as many nieces. A visitation will be held Saturday, October 23rd, 2021 from 1pm-4pm at Henson & Kitchen Mortuary, 6357 E. Pea Ridge Road, Huntington, WV 25705. Online condolences and memories may be shared with the family by visiting www.hensonandkitchen.com

Walter E. Smith, 83, of Ona, WV, passed away on October 16, 2021 after a battle with heart and kidney disease. Walt was born November 24, 1937 in Paris, TN, the son of Murray and Minnie Smith. He graduated from Henry High School in 1956 and... View Obituary & Service Information

The family of Walter Earl Smith created this Life Tributes page to make it easy to share your memories.

Send flowers to the Smith family.