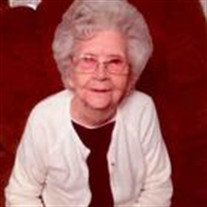 Valeria B. Johnston,93, of Huntington, passed away Tuesday, July 14, 2015, at St. Mary's Medical Center. She was born April 17, 1922 in Winfield,Putnam County, W.V, a daughter of the late Oscar and Iva Pierce Washington. Funeral services will... View Obituary & Service Information

The family of Valeria B. Johnston created this Life Tributes page to make it easy to share your memories.

Valeria B. Johnston,93, of Huntington, passed away Tuesday, July...

Send flowers to the Johnston family.