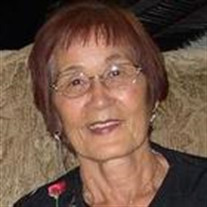 Tazuko Morita Swann, 88 passed away, Monday, December 30, 2013 in Rosetta Assisted Living Center, Missoula, Mont. She was born February 21, 1925 in Fuknoka, Japan.  She was a homemaker, seamstress and former member of Central United Methodist Church, Hamlin, WV. In addition to her parents, she was preceded in death by her husband, James Webster “Jim” Swann; two grandchildren, Rebecca and Jeremy and one sister, Taruko. Tazuko came to the United States in 1953 with her late husband, “Jim” and they were married for 52 years where they lived in Barboursville and Hamlin, WV. Together, they raised three children, James Richard “Rick” Swann of Fayetteville, NC, John Michael “Mike” Swann (Lisa) of Sod, WV and Amy Margaret Wright (Chet) of Missoula, Mont.  After raising their three children, Tazuko and Jim moved to Ft. Lauderdale, FL for eighteen years and then to Las Vegas, NV for two years. After Jims passing in 2005, Tazuko moved to Missoula, Mont to live with her daughter, Amy and son-in-law, Chet. In addition to her children, she is survived by ten grandchildren; one sister, Hisae of Fuknoka, Japan; one brother, Rev. Isao Nishio of Kyoto, Japan and several nieces and nephews  and host of friends in both the U.S. and Japan. Funeral services will be conducted at 11:00 AM on Saturday, January 11, 2013 at Henson & Kitchen Mortuary, Barboursville, WV. Burial will follow in White Chapel Memorial Gardens, Barboursville, WV.  The family will receive friends from 6-8 PM on Friday, January 10, 2013 at Henson & Kitchen Mortuary, Barboursville, WV. Online condolences and memories may be shared with the family by visiting www.hensonmortuary.com.

The family of Tazuko Swann created this Life Tributes page to make it easy to share your memories.

Send flowers to the Swann family.