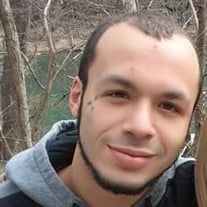 Steven (Dee-Boogie) Derrick-Lee Douglas, 24 yrs old, born March 3rd, 1997 in Huntington, WV to Kristy Lynn Douglas and Fredrick Edward Douglas went home to be with his parents on Saturday April 17th, 2021. Steven was proceeded in death by both his parents Kristy and Fred. His maternal grandfather whom he was named after Steven Douglas and his paternal grandfather Finley Davis. Steven is survived by three brothers Christopher and Donnavan Douglas of Huntington, WV and Brody Peiffley of Bridgeport, WV and one sister Viktoria Douglas of Ashland, KY. Steven is also survived by three aunts Kelly (Gary) Miller of Ashland, KY, Kimberly (Chris) Workman of South Point, Oh and Ashley Hammond of Kansas; one uncle, Jason Hammond of Lexington, KY; two nieces, Lyric and Ivalee Douglas and a nephew Zion Douglas and a host of cousins and numerus friends. Steven was funny, creative and an avid animal lover. He didn’t see an animal he didn’t think he didn’t need. He was the same with people he never saw a person that he didn’t think he needed to be friends with. He loved music and loved writing poems to put to a rap song. He loved spending time with his siblings because they were his best friends. Steven had a huge heart and a smile that would light up any room he was in. Steven’s favorite thing of all time though was food! As all his siblings have said they think he loved food more than anything and didn’t care to make his own concoctions in the kitchen. He was a magic chef according to him better than Chef Boyardee he was Chef Boyar ”deedee”. As a kid Steven enjoyed playing in the creek and playing army in the woods with his brother and friends. He was always into something that would totally keep us on our toes always wondering what was coming next like shooting BB guns at the neighbor’s house. He was always so full of mischief and would just look at you and give you that smile, and you almost couldn’t be mad. Steven never knew a stranger and had more friends, aunts, uncles, sisters, and brothers than any kid I ever met. Everyone Steven knew was family to him and I believe that they felt the same way about him, he was family to all who knew him. He was most definitely his mother’s child when it came to people. Steven struggled with the loss of his parents and grandfathers always feeling like there was a hole left inside him. He fought his demons the best he could just trying to make each day count. He fought hard for a better life this last year when he had to have open heart surgery and worked hard to get back home to his family, but he still struggled. On Saturday he was made whole again when he was reunited with his mom, dad and grandfathers. Steven was loved by so many and he will be missed by so many more. Now he is our angel always watching over each of us. As a family we ask if you can to donate to any local Drug rehabilitation center, sober living home, City Mission or Harmony House in Steven’s name. Henson and Kitchen Mortuary, 6357 E. Pea Ridge Road, Huntington, WV near Barboursville is caring for the family. www.hensonandkitchen.com

The family of Steven Derrick Lee Douglas created this Life Tributes page to make it easy to share your memories.

Send flowers to the Douglas family.