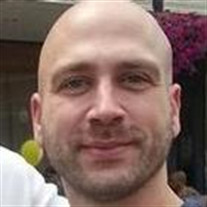 Scott left this world by his choice and own actions. He has been fighting internal battles since he was a teenager His enemies were depression and drugs. Many times it was one step forward and two steps back.  Scott’s desire for privacy and hiding his struggles were also players in the battle. His private demons were unknown to many who knew him.  Scott had entered the road to recovery multiple times, before he was called back in to battle. His current life appeared that it was going to be his success story. We were wrong. He lost his battle. This horrible combination of diseases is the most difficult to treat, because of its permanent residence in the victims own mind. Scott received unconditional love, encouragement, and support from family but it was not enough. God continuously heard his name in prayer. Scott’s legacy would be to awaken others to the pitfalls of these diseases and to seek help and never ever give up trying.  Scott, we will always love you. - Scott Gerlach, 34 of Huntington, W.Va. passed away, Friday, August 22, 2014.  He was born June 27, 1980 in Huntington, W.Va. the son of Gigi and Tim Gerlach of Huntington, W.Va.  He was a 1998 graduate of Cabell Midland High School, served six years in the U.S. Navy and was an Operating  Room Technician at Cabell Huntington Hospital.  In addition to his parents, Scott is also survived by one brother, William Craig (Tia) Gerlach of  Fla; two sisters, Heather Willis of SC. and Jessie (Michael) Pralle of MD; five nieces and nephews and a host of family and friends.  Funeral services will be conducted at 7:00 PM on Monday, August 25, 2014 at Henson & Kitchen Mortuary, Huntington, W.Va. near Barboursville with Chaplin Tom Hastie officiating. The family will receive friends from 5-7 PM prior to services at the funeral home. In lieu of flowers, the family requests memorial donations be made in Scott's memory to The Healing Place of Huntington, P.O. Box 8061, Huntington, W.Va. 25705. Online condolences and memories may be shared with the family by visiting www.hensonmortuary.com .

Scott left this world by his choice and own actions. He has been fighting internal battles since he was a teenager His enemies were depression and drugs. Many times it was one step forward and two steps back.  Scott&#8217;s desire for privacy... View Obituary & Service Information

The family of Scott Gerlach created this Life Tributes page to make it easy to share your memories.

Scott left this world by his choice and own actions. He has been...

Send flowers to the Gerlach family.