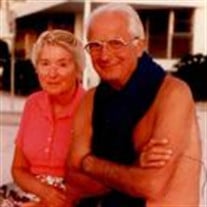 Robert Edward Kapinos, 96 of Huntington, W.Va., passed away, Saturday, November 22, 2014 at the Emogene Dolin Jones Hospice House, Huntington, W.Va. He was born December 17, 1917 in Baltimore, MD, the son of the late George Herman Kapinos and Edith Swalwell Kapinos. He was also preceded in death by his wife, Virginia Rhodes Kapinos. He was a graduate of Huntington High School, served in the National Guard and was retired from INCO where he worked for forty years.  He was a member of Pea Ridge United Methodist Church. He had a very full life. He enjoyed motorcycle touring, camping, hunting, fishing, boating and most outdoor activities. He is greatly missed by his family and friends. He is survived by one daughter, Marianne Kapinos of Charleston, W.Va. and one son, Robert “Bob” Edward Kapinos II. and his wife, Du-Wanna Kapinos of Ona, W.Va; one granddaughter, Kristy Byrd; two great-granddaughters, Kay-Leigh and Aubrey. There will be no services. In lieu of flowers, the family wishes memorial donations to be made to Hospice of Huntington. Henson & Kitchen Mortuary, Barboursville is caring for the family. Online condolences and memories may be shared with the family by visiting www.hensonmortuary.com .

The family of Robert Edward Kapinos created this Life Tributes page to make it easy to share your memories.

Send flowers to the Kapinos family.