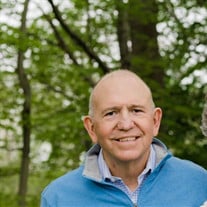 Ray McKinley Adkins, II, passed away Monday, September 27, at Cabell Huntington Hospital following a long, private battle with cancer. He was born December 5, 1961, in Oak Hill, WV, to the late Ray and Irene Adkins. He spent his adult life in Huntington after falling in love with Marshall University and finding the true love of his life there, his wife of 35 years, Carrie (Patterson) Adkins. Along with his parents, he is preceded in death by his sister, Renee Green (Tony), and father and mother in law, Roy and Donna Patterson. In addition to his beloved wife, he is survived by his two dear children, Brian Adkins (Amanda) of Dallas, TX, and Eden Mays (Daniel) of Lebanon, OH, as well as three grandchildren and one on the way, Benjamin Adkins, and Ellis, Margaret, and Rex Mays, who were the light of his life. He also leaves behind a sister who loved him as her own son, Laura Romanowski Talbert (Ted) of Huntington, as well as sisters in law, Cynthia Lewis (Bill) of Princeton, and Cathy Snodgrass of Charleston. Also surviving are numerous nieces and nephews and their children, all of whom he cherished in a special way. His passing is also grieved by the many close friends he kept from childhood, his fraternity, career, golf league, church community, neighborhood, and every aspect of his life. Ray retired in 2019 from his career in tobacco industry sales, after more than 25 years with U.S. Tobacco, and several more spent working for a local distributor, and most recently, Xcaliber International. His work was a point of pride for him, and he amassed so many dear friends and colleagues throughout his territory, which took him across the state of West Virginia and into Eastern Kentucky and parts of Southern Ohio. His time away from work and his retirement were filled with the many people and things that he loved. He was a passionate Marshall football and basketball fan, golfer, runner, outdoorsman, and family man. It’s hard to say where he was his happiest, but some good guesses could be on the golf course with buddies, hosting “garage parties” with music and cornhole, Homecoming weekends at Marshall, or alongside his wife playing with his grandchildren. The quiltwork of Ray’s life was a masterpiece - layered with, and colored by, memories of his early years being raised by his grandmother in a farmhouse, playing sports and running track, working at Babcock State Park, proudly going to five proms his senior year of high school, training as a river guide, dabbling in boxing, joining the Catholic Church, playing Spades at Sunday dinners, serving as a Scout leader, spending vacations at Myrtle Beach, taking walks on the river trail at Barboursville Park with his wife, maintaining his lawn and vegetable garden, and holding his grandbabies on his lap. While to a stranger he may have seemed a simple and ordinary man, he was extraordinary in the eyes of everyone who knew him...and he never did meet a stranger. The family would like to thank Dr. Kathy Saber for the special care she provided to Ray always and for her lifelong friendship. Family and friends are invited to gather at Henson & Kitchen Mortuary, 6357 E. Pea Ridge Road, Huntington, WV 25705 for visitation Thursday, September 30 from 5:00 to 8:00 PM. A funeral mass will be held at St. Stephen’s Catholic Church, Ona, WV on Friday, October 1 at 10:00 AM, followed by graveside services, and a meal at the church. Online condolences and memories may be shared with the family by visiting www.hensonandkitchen.com

The family of Ray McKinley Adkins II created this Life Tributes page to make it easy to share your memories.

Send flowers to the Adkins family.