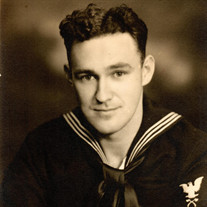 Paul Jackson “Jack” Eddy, our beloved father peacefully and graciously entered the Kingdom of Heaven on January 10, 2017 surrounded by his loving family. Our dad was born on January 17, 1919 in Huntington, W.Va. the oldest son of the late Pearl and Ross Eddy. As the oldest son, he protected and provided for his siblings. They loved, respected and admired their big brother all their lives. After graduation from Huntington High School, he enlisted in the U.S. Navy during World War II and proudly served his country for four years aboard the battleship New Jersey. Although wounded during an enemy air attack, he was too modest to accept a purple heart. After graduating from WVU with a business degree, he was employed by ACF Industries as an estimator until his retirement. Our father was a faithful member of the former Highlawn Baptist Church choir in Huntington, W.Va. for over 50 years. He blessed many souls with his beautiful tenor voice. The members of his Brothers Bible Class were truly brothers and he greatly appreciated their friendship, love and support through the years. His affection also extended to all former members of Highlawn Baptist Church, especially Mary and Jim Curnutte and one of his favorite pastors, Jim Franklin. Christian fellowship with others enriched and comforted our father throughout his life. He toiled endlessly for God, family and church. His children were blessed by his faithfulness, kindness, love and generosity. Dad will be missed more than words can express. He was truly a member of the Greatest Generation. The family appreciates the compassionate and excellent care provided by the Huntington V.A. Medical Center and Cabell Huntington Hospital. In addition to his parents, he was preceded in death by his beloved wife, Genevieve Eddy; two sisters, Ruth Eddy and Helen Henley; two brothers, baby, Miles Eddy and Jim Eddy. He is survived by daughters, Jackie (Russell) Legg, Jill Cremeans and Jean Eddy; sons, James Eddy and John (Robin) Eddy and brothers, Carlton Eddy and Larry (Donna) Eddy; several grandchildren and great-grandchildren and beloved pets. Memorial donations may be made to the Cabell-Wayne Animal Shelter, 1901 James River Road, Huntington, W.Va. 25704 in appreciation for the wonderful companions we adopted through the years. Funeral services will be conducted at 1:00 PM on Saturday, January 21, 2017 at Henson & Kitchen Mortuary, Huntington, W.Va. with Pastor Jerry Chapman officiating. Burial will follow in Springhill Cemetery, Huntington, W.Va. with military honors provided by American Legion Post #16 Huntington, W.Va. The family will receive friends from 11:00 AM until service time on Saturday at the funeral home. Online condolences and memories may be shared with the family by visiting www.hensonandkitchen.com .

Paul Jackson &#8220;Jack&#8221; Eddy, our beloved father peacefully and graciously entered the Kingdom of Heaven on January 10, 2017 surrounded by his loving family. Our dad was born on January 17, 1919 in Huntington, W.Va. the oldest son of... View Obituary & Service Information

The family of Paul Jackson Eddy created this Life Tributes page to make it easy to share your memories.

Send flowers to the Eddy family.