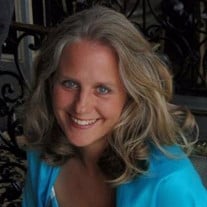 Dr. Paige A. Muellerleile, 48, of Huntington, WV, died July 12, 2019. She was born August 6, 1970, in Mankato, MN, the daughter of Tom Muellerleile and Arlene Watnemo Renshaw. Paige attended public school in Mankato, graduating from West High School in 1988. Though described by herself and others as a shy child, her gifts of scholarship and leadership began to emerge in those early years. She married Christian Siebens in 1989 and moved to Phoenix, AZ, with him, though they divorced a few years later. Paige earned her Bachelors’ degree from Arizona State University in 1994, graduating Magna Cum Laude in Psychology. She then went on to earn her Masters’ and Doctoral degrees from Syracuse University in New York. She taught at SUNY, Cortland, and the University of Wisconsin, Marshfield, before joining the Psychology Department at Marshall University in Huntington, WV, where she also served as chair of the Faculty Senate from 2016-2018. Due to failing health, she retired from Marshall at the end of spring semester in 2019. She was a passionate and engaging professor, characterized by her students as tough, but fair, mentoring them with firm but loving guidance. During her graduate student days at Syracuse, Paige met Jeffrey Kovatch, a grad student in biology, whose passion for life matched her own. They married in 2003 in a memorable outdoor ceremony and celebration in upstate New York. A life of shared adventure was launched as they established careers in academia. Each was passionate about their professional fields; they also shared a love of nature and of the communities in which they lived. In due time they welcomed two lovely daughters into their lives, Jada and Chelsea. Paige’s passion for social justice issues framed her participation in community volunteerism wherever she lived. As a college student in Arizona, she became a tour de force in a group that helped to provide care for persons living with HIV and AIDS. Her activism continued in Huntington where she participated in the Southside Neighborhood Association, Harmony House, and the Cabell County Drug Court. She served on the board of the Contact Rape Crisis Center for a decade, twice serving as its president. A joyful and productive life began to unravel in 2014 when Paige was diagnosed with stage 3 breast cancer. What followed was a difficult year+ of surgery, radiation and chemotherapy that left Paige struggling to recover while Jeff shouldered family responsibilities. In 2016, with Paige in better health, the anticipation of better times ended brutally when, on a day in early October, Jeff collapsed from a brain aneurysm and died a month later. Paige was diagnosed with metastatic breast cancer (MBC) just eight months later, a ruthless, aggressive cancer for which treatment options remain scarce. Paige was a thinker, a listener and a doer, living life deliberately and with enthusiasm. Her interests were many in addition to teaching, writing, research and passionate parenting: cooking, legendary baking, gardening, reading, political activism. She was a friend to many, especially embracing her MBC sisters from near and far. To celebrate Paige, her family asks that you treasure the time with your loved ones, take an active part in your community, laugh and love much, and always care about “the other” in your midst. In addition to her husband Jeff, Paige was preceded in death by her grandparents, Winnifred and Tony Muellerleile, and Agnes and Harry Watnemo. She is survived by daughters Jada and Chelsea; mother Arlene Renshaw of Mankato, MN; father Tom Muellerleile of Minneapolis, MN; sister Caryn Muellerleile of Washington, DC; many aunts, uncles and cousins. A memorial service will be held at 4:00 on Friday, August 2, in the Joan C. Edwards Performing Arts Center on the Marshall University campus. Memorials are preferred to METAvivor, which dedicates all donations to stage 4 breast cancer research.

The family of Dr. Paige A. Muellerleile created this Life Tributes page to make it easy to share your memories.

Send flowers to the Muellerleile family.