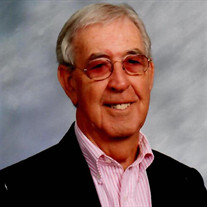 Orville “Eddie” Russell (July 25 1932 – Nov. 15, 2017) ascends to heaven with a tanline of his wristwatch. After 25 years of owning a swimming pool as an adult, plus four spent in the U.S. Navy aboard the USS Saufley in Key West, Fla., in the early 1950s, it’s likely that his wristwatch tanline extended all the way down to the bones of his left arm. A 1950 Huntington High graduate and lifelong Marshall fan who attended the first game at the Joan with season tickets for years after, Eddie married his high school sweetheart Zetta (Dillon) Russell and they spent the next 62 years together. They had three kids with personalities as distinct as the colognes Eddie spent most of his career selling for Coty. First was Vicki, who will laugh at darn near anything. Seriously, just wink at her or make a face and she’ll start giggling. Then there was Jeff. He was a nerd with glasses and long hair in high school, but he still managed to snag Donna (Reese) Russell and have two children (Brian and Stephanie) who couldn’t grow a wristwatch tanline if you shipped them to live in Florida. That fact hasn’t stopped Stephanie and her husband Dave (Tran) from trying exactly that. Eddie and Zetta’s third child was Barri, the popular high school Homecoming queen who inherited her mom’s good looks. She married Ron (LaPierre) and moved to Connecticut, where their kids Blake and Blair are a Boy Scout and a gymnast. Eddie was the son of Walter E. and Nora Huffman Russell, born and raised in the tri-state area. His sister Janet (Jim) Carpenter lives in Oklahoma and gave Eddie three nephews – Marty, Tim and Scott. He also had a nephew, John Noble, who helped care for him during his final years and whose presence he greatly appreciated. Eddie, a member of Pea Ridge UMC, will now take his love of root beer, professional wrestling and his cooking skills to heaven, where he will surely tell Jesus – “Have another pancake. You’re a growing boy.” Funeral Services will be conducted at 1:00 PM on Saturday, November 18, 2017 at Henson and Kitchen Mortuary, Huntington, W.Va. with Rev. Angela Gay Kinkead, officiating. Burial will follow in White Chapel Memorial Gardens, Barboursville, W.Va.with military honors provided by American Legion Post #139 Milton, W.Va. and the United States Navy. The family will receive friends on Saturday, two hour prior to services at Henson and Kitchen Mortuary, Huntington, W.Va. Online condolences and memories may be shared with the family by visiting www.hensonandkitchen.com.

The family of Orville Eddie Russell created this Life Tributes page to make it easy to share your memories.

Send flowers to the Russell family.