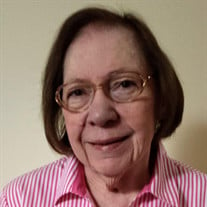 Nancy Lee Gladwell Ritchie, 84, of Huntington, WV, died Thursday, January13, 2022 at Cabell Huntington Hospital after a long illness. She was born March 18, 1937 in Charleston, daughter of Arthur Lee Gladwell and Brownie “Bee” Loudermilk Gladwell of Dunbar. When she was three years old the family moved to Lewisburg where her father was eventually elected Mayor. She was graduated from Lewisburg High School before attending Marshall University in Huntington and then Greenbrier College for Women in Lewisburg. She was selected as a princess in the Mountain State Forest Festival in 1956. She was a member of Eastern Star. She was first employed by her family’s business, Bee Jewelry Store in Lewisburg, and later in the office of the County Extension Service for Greenbrier County. She married the love of her life Garry Harlan Ritchie, a radio/TV broadcaster, in 1958 and moved with him back to Charleston. She took a job in the Charleston office of WOWK-TV where she earned money to help finance her husband’s college education. In later years she followed his rising career to Cleveland, OH; Stamford, CT; Cincinnati, OH; Gainesville, FL; Scranton, PA; Portland, ME and back to Huntington, WV. An avid and expert quilter Mrs. Ritchie belonged to a number of quilting clubs and societies and taught quilting classes in Cleveland, Gainesville and Scranton. She won awards for her quilts including a best of show in a state of Florida quilt exhibition. Like her husband, Mrs. Ritchie also held a “ham” radio license with the call letters WB8GSD, and was a member of the Tri-State Amateur Radio Association. Her church membership was at Pea Ridge United Methodist in Huntington. She is survived by her husband Garry, by sons Arthur Harlan Ritchie of Lodi, OH (wife Lisa), and Michael Lee Ritchie of DeLand, FL (wife Colette), and by grandchildren Brian Lee Ritchie of Stratton ME, Amanda Nicole Ritchie Litteral of Galloway, OH (husband Zachary), and Ashley Katherine Ritchie of Lodi, OH. Also surviving is her brother, Dr. David Arthur Gladwell of Bedford, VA (wife Elizabeth) and many nieces and nephews. Instead of flowers a memorial gift to a charity of the donor’s choice could be a fitting tribute. Respecting Covid protocols there will no viewing and private services will be conducted on Wednesday, January 19, 2022 at 10:00 AM by Rev. Shannon Blosser at Henson and Kitchen Mortuary in Barboursville. Burial will be in her parents’ plot at Rosewood Cemetery in Lewisburg.

The family of Nancy Lee Gladwell Ritchie created this Life Tributes page to make it easy to share your memories.