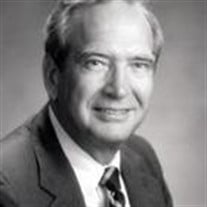 Milton Thomas Herndon, passed away on June 27, 2015 in Huntington, WV. He was 86. Born in Oak Hill, West Virginia, Milton graduated from Oak Hill High School, and subsequently attended Virginia Polytechnic Institute (now Virginia Tech) where he was a member of the Corps of Cadets and graduated with a degree in Chemical Engineering in 1951. Milton was a commissioned Second Lieutenant, serving in the 145th Anti-Aircraft Battalion, 45th Division, U.S. Eighth Army in the Korean War from 1951-1953. During his service, he was promoted to First Lieutenant. Milton Herndon received his LLB from Washington and Lee University School of Law in 1956. He served as President of the Law School Student Society and the Phi Alpha Delta Law Fraternity. He then joined the firm of Campbell, Woods, Bagley, McNeer, Emerson and Herndon, where he practiced law for 51 years and ultimately served as Managing Partner. Mr. Herndon was voted Best Lawyer in West Virginia in Wills, Trusts and Estates for more than 20 years. He was also a member of the American College of Trust and Estate Counsel (ACTEC) from 1990 to 2010 and served as Chairman of the West Virginia State Bar Probate Committee for many years. Milton Herndon was actively involved in the Huntington community, serving on City Council and as Huntington’s mayor from 1970-72. He was a long-standing member of the Huntington and Charleston Rotary Clubs, City Club, and served on the Board of Directors of the Huntington Museum of Art and the Prestera Center. Mr. Herndon served for many years on Washington and Lee University’s Law Council, the governing board of the Law Alumni Association, and in many other roles as an active alumnus. He will be remembered for his dedication to the law profession, exceptional work ethic and strong personal integrity. Milton Herndon, was preceded in death by his brothers Robert B. Herndon of Gauley Bridge, WV, Clarence G. Herndon, William L. Herndon and his sister Eunice M. Herndon of Oak Hill, WV. Mr. Herndon is survived by his wife, Jane W. Herndon; his children, Dr. Deborah D. Herndon, Dr. M. Boyd Herndon, Marion Herndon Fuqua and Thomas K. Herndon, eight grandchildren and five great grandchildren. The Herndon family will receive friends at the First Presbyterian Church in Huntington beginning at 2:00 PM until 3:30 PM on Sunday, July 5, 2015. Funeral services will follow at 3:30 PM at the church on Sunday. Burial and graveside services will be conducted at 2:00 PM on Monday, July 6 at Evergreen Cemetery in Roanoke, VA.  In lieu of flowers, the family requests that donations may be made in his memory to the Alzheimer’s Association, West Virginia Chapter, in Charleston, WV. Henson & Kitchen Mortuary, Barboursville, W.Va. is caring for the family. Online condolences and memories may be shared with the family by visiting www.hensonmortuary.com .

The family of Milton Thomas Herndon created this Life Tributes page to make it easy to share your memories.

Send flowers to the Herndon family.