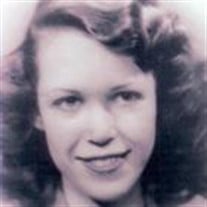 Mary Frances Lenhart Core, 85 of Huntington, W.Va. passed away, Monday, February 15, 2016 in the Emogene Dolin Jones Hospice House, Huntington, W.Va. She was born April 21, 1930 in Morgantown, W.Va. the daughter of the late, William Roy and Frances Williams Lenhart. She was a homemaker and member of Bates Memorial Presbyterian Church. She was also an award winning quilter and avid Gardner with a variety of other creative interests. In addition to her parents, she was also preceded in death by her husband, John Merle Core. She is survived by one son and daughter-in-law, Michael and Rhonda Core of Birmingham, AL. one sister, Ruth (Earl) DeWitt, of Seattle WA; one brother, Robert (Betty) Lenhart of Morgantown, W.Va; sister-in-law, Sue Core of Elkins, W.Va; brother-in-law, Harry Core of Concord, OH; two grandchildren, Todd (Jennifer) Core of Lufkin, TX and Lindsey Core and her fiancé, Kevin Parekh of New Market, Ontario, Canada; two great-grandchildren, Zooey Core and Mahilla Core and eleven nieces and nephews. Funeral services will be conducted at 11:00 AM on Thursday, February 18, 2016 at Henson & Kitchen Mortuary, Barboursville, W.Va.  Burial will follow in White Chapel Memorial Gardens. The family will receive friends from 6-8 PM on Wednesday, February 17, 2016 at Henson & Kitchen Mortuary. Online condolences and memories may be shared with the family by visiting www.hensonandkitchen.com .

The family of Mary Frances Core created this Life Tributes page to make it easy to share your memories.

Send flowers to the Core family.