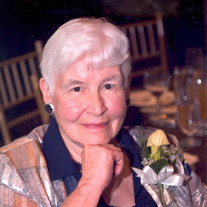 Loula "Lou" Hanger Rhodes, 89, of Huntington, WV passed away, November 14, 2016 at Emogene Dolin Jones Hospice House in Huntington. She was born on September 29, 1927 in Waynesboro, VA. the daughter of the late, Franklin and Mary Hanger. She was a 1945 graduate of Waynesboro High School; over her career she was a professional photographer and worked in a number of administrative and clerical positions, including Executive Secretary to the Publisher at Huntington Publishing Co., which published the Herald Dispatch, and finally retired from the Logan Corporation; she also taught Sunday school, was a Girl Scout Leader, and, in retirement, and was a long-time volunteer for Hospice of Huntington. She enjoyed reading, watching Marshall University athletics, and spending time with her children, grandchildren, and great-grandchildren. In addition to her parents, she was also preceded in death by her husband, Richard Rhodes and her brother, Arthur Hanger. Lou is survived by two sisters, Mazie Huffman (Woody) of Waynesboro, VA. and Grace Fulkerson of Longview, TX; her two children, David Rhodes (Carol Kennedy) of Denver, CO. and Liza Gettles (Dave) of Raleigh, NC; three grandchildren, Sara Krahnke (Jason) of Norfolk, VA., Anna Gettles (Chase McNeil of Los Angeles, CA, and Greg Gettles of Charleston, SC; and two great grandchildren, Ben and Amy Krahnke both of Norfolk, VA. Funeral services will be conducted on Thursday, November 17, 2016 at Henson & Kitchen Mortuary; Huntington, W.Va. Burial will follow in Ridgelawn Memorial Park, Huntington, WV. The family will receive friends from 11:30 AM to 1:30 PM service time on Thursday at the funeral home. In lieu of flowers, the family requests donations to be made to Emogene Dolin Jones Hospice House, 3100 Staunton Rd, Huntington, WV 25702. Online condolences and memories may be shared with the family by visiting www.hensonandkitchen.com.

Loula "Lou" Hanger Rhodes, 89, of Huntington, WV passed away, November 14, 2016 at Emogene Dolin Jones Hospice House in Huntington. She was born on September 29, 1927 in Waynesboro, VA. the daughter of the late, Franklin and Mary Hanger. She... View Obituary & Service Information

The family of Lou Hanger Rhodes created this Life Tributes page to make it easy to share your memories.

Send flowers to the Rhodes family.