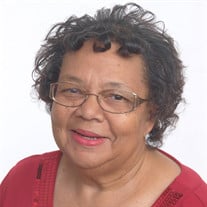 Lottie Jane Neely Simms, 75, of Huntington, W.Va., passed to her eternal home Saturday, December 23, 2017 in Las Vegas, NV. To know Lottie was to know that she believed in helping others. Not only was she an awesome mother, great teacher, great role model and a leader in her community, she left a legacy of children and grandchildren who will follow her footsteps. Funeral service will be conducted 3:30 p.m. Friday, January 19, 2018, at Christ Temple Church in Huntington, WV, with Pastor Chuck Lawrence officiating. Interment will follow on Saturday at 10:00 a.m. at White Chapel Gardens. Lottie was born January 30, 1942 in Huntington, W.Va., a daughter of the late Willie L. and Grace Buckingham Neely. In addition to her parents, she was also preceded in death by her daughter, Grace Davenport, brothers James Browder and John Neely and her sister, Bessie Smith. Lottie led an amazing life growing up with Polio; breaking the race barrier as one of the first African American students to attend Huntington High School on to becoming the first female African American principal in the Cabell County School District where she touched the lives of thousands of young people. She was also a servant in her community where she served on the board of directors for the Cabell County Public Library, the Universal Federal Credit Union, and the City of Huntington Foundation. She also served as president of the Elementary Principal’s Association. She is survived by her daughter and son-in-law, Evelyn and Dayo Adelaja of Las Vegas, and her son and daughter-in-law, Donald and Melissa Simms of Huntington; her grandchildren, Natalie and Christine Adelaja, Isaiah Davenport, Matthew, Ian, William, Elijah, and Laylah Simms, Georgia and Chase Browning, Mykaela Napier, a great granddaughter, Aria Leilani, and a host of nieces and nephews. The family wishes to express their deepest gratitude to all who knew her, for it gave her great joy to be with and serve people. It is through you that she was able to accomplish her greatest triumph – to serve God with all her heart, mind and soul. Visitation will be from 6 to 8 p.m. Thursday, January 18, 2018, at Henson & Kitchen Mortuary, 6357 East Pea Ridge Road in Huntington. Online condolences may be expressed at www.hensonandkitchen.com.

Lottie Jane Neely Simms, 75, of Huntington, W.Va., passed to her eternal home Saturday, December 23, 2017 in Las Vegas, NV. To know Lottie was to know that she believed in helping others. Not only was she an awesome mother, great teacher,... View Obituary & Service Information

The family of Lottie Jane Neely Simms created this Life Tributes page to make it easy to share your memories.

Send flowers to the Simms family.