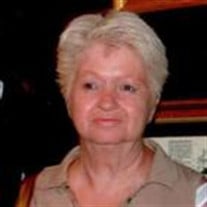 Lorraine Eudora Cook McComas, 74 of Ona, W.Va. passed away, Monday, December 15, 2014. She was born March 14, 1940 in Lorado, W.Va. a daughter of the late Howard and Opal Cook Cook.  She was retired from Eastwood Learning Center and was a member... View Obituary & Service Information

The family of Lorraine Eudora Cook McComas created this Life Tributes page to make it easy to share your memories.