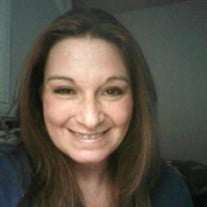 Lisa Dawn Fought, 49 of Virginia Beach, Virginia, formerly of Huntington, W.Va. passed away, January 8, 2017. She was born February 27, 1967 in South Williamson, Kentucky the daughter of the late Robert Edward Fought who always referred to Lisa as his “Baby Girl” and Donna Jean (Hall) Fought. She graduated from Vinson High School and Marshall University. After graduating from Marshall University, she wanted to become a nurse. She graduated from St. Mary's Nursing School and was so proud to be a nurse and loved her job. It was devastating when back problems forced her to retire. When she was three years old and her uncle Barry was thirteen, she always referred to him as Melvin. She had gotten some play clothes that included a wedding dress and she wanted to marry Melvin. Barry was so shy, but he went thru the wedding to make Lisa happy. Lisa's dad was in a wheel chair from a war injury. When Lisa was in kindergarten and was going to be in a school play, she looked for ways that her dad could get into the building to watch her play. She was so excited to tell him that she had a way for him to get into the building. She was his “Baby Girl”. From the time Lisa was young, she had a lot of health problems. Through all of her illnesses and surgeries, she never complained. She is survived by her loving husband, John Cashat of Virginia Beach, Va. Lisa always said that John was the best thing that ever happened to her. He was with her throughout many surgeries and fighting cancer for seven years. She was also survived by her aunts and uncles, Judy and Larry Smith, Rex and Susie Fought, Barry and Mary Ellen Hall and Jay and Gail Fought and a host of friends. Funeral services were conducted at 11:00 AM on Monday, January 16, 2017 at Ridgelawn Memorial Park, Huntington, W.Va. Burial followed the services. Henson & Kitchen Mortuary, Huntington, W.Va. is caring for the family. www.hensonandkitchen.com .

The family of Lisa Dawn Fought created this Life Tributes page to make it easy to share your memories.

Send flowers to the Fought family.