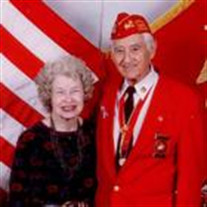 Lillie Irene Sexton Roberts, 85, of Huntington, WV, passed away Monday, September 15, 2014 in the Emogene Dolin Jones Hospice House and was reunited with her loving husband, Virgil. Irene was born July 17, 1929 in Bidwell, OH, the daughter of the late George Sexton and Alice Hatfield Rutan. She was also preceded in death by one sister, Helen Rutan Greene. She graduated from Gallia Academy 1948 and from Holzer Hospital School of Nursing 1951. She is a retired Registered Nurse and previously worked at Cabell Huntington Hospital, St. Mary’s Hospital and the former Huntington Hospital. She was a member of Providence Reformed Presbyterian Church, Barboursville, WV. Irene was a wonderful wife, mother and grandmother, always lovingly insisting upon proper etiquette and good manners. She would whistle a tune and clap her hands when she heard a familiar song, gravitated towards children and babies, greeting them with a friendly “Hi, doll-baby” or “Hello sweetie-pie”. She had a zeal for presenting the gospel and within a short time of meeting her you knew her faithful stance. Her family knew her immense love that she had for them. She is survived by three sisters, Virginia Rutan Kirby, Gallipolis, OH, Sharon Rutan Russell, Vinton, OH, and Diana Nibert of Gallipolis, OH and one brother, Sherman Lee Rutan of Bidwell, OH. Virgil Bruce Roberts, 88, of Huntington, WV passed away Saturday, September 13, 2014 in the Emogene Dolin Jones Hospice House, Huntington, WV. He was born February 2, 1926 in North Braddock, PA, son of the late John T. and Jennet Edwards Roberts. He was also preceded in death by one sister, Faith Roberts Gensler; two brothers, John Milford Roberts and Arthur Hannum Roberts. He graduated Point Pleasant High School 1943, attended WVU, and graduated from American Television Institute of Technology, Chicago, IL, November 11, 1949 with a B.S. Degree in Television Engineering. He was a U.S. Marine Corps Veteran, where he enlisted January 20, 1944 at age 17. He served in the Pacific Theater during WWII and participated in the occupation of Japan. Virgil separated from service August 1, 1946 and recalled to active duty to participate in the Korean War October 26, 1950. He separated from the service December 9, 1951. He retired from the International Nickel Company as an Electronics Engineer, and was an active member of the Marine Corps League, and of Providence Reformed Presbyterian Church, Barboursville, WV. He was a devoted husband, father and grandfather. He was noble, wise, generous beyond measure, always a gentleman, yet had a sense of humor that would catch you off guard. Together, Virgil and Irene are preceded in death by son-in-law, Charles Jeffrey Conner and one grandson, Brian Phillip Frye. They are survived by their children, Jennifer Roberts Alldredge (Dan) of Evansville, IN, Melissa Roberts Conner of Kailua, HI, Virgil Bruce Roberts, Jr. (Susan Sinclair) of Wilmington, NC, Valerie Roberts Harry (Steve) of Newburgh, IN, Randall Roberts (Rose) of Salt Rock, WV; twenty grandchildren, Stephanie Frye Adkins, Jessica Frye Cox, Justin Frye, Samantha, Erin and Joshua Conner, Randalle, Reuben, David and Joseph Roberts, Alison Harry Alldredge, Elyse, Kathryn, and Olivia Harry, Levi, Caleb, Luke, Gabriel, Eve, and Phoebe Roberts; eleven great-grandchildren, Alexandra, Emmalina, Vivienne, Trevor, Gretta, Tucker, Josie, Bria, Alexus, Christian and Evelyn and a host of family and friends. Joint funeral services for both Virgil and Irene will be conducted at 12:00 noon on Saturday, September 20, 2014 at Pea Ridge United Methodist Church with Rev. Mark Kozak officiating. Burial will follow in White Chapel Memorial Gardens, Barboursville, WV. Visitation will be from 5-8 PM on Friday, September 19, 2014 at Henson & Kitchen Mortuary, Barboursville, WV and 11 AM prior to the service at the church. In lieu of flowers memorial donations may be made to the Emogene Dolin Jones Hospice House. Online condolences may be shared with the family by visiting www.hensonmortuary.com.

Lillie Irene Sexton Roberts, 85, of Huntington, WV, passed away Monday, September 15, 2014 in the Emogene Dolin Jones Hospice House and was reunited with her loving husband, Virgil. Irene was born July 17, 1929 in Bidwell, OH, the daughter of... View Obituary & Service Information

The family of Lillie Irene Roberts created this Life Tributes page to make it easy to share your memories.

Send flowers to the Roberts family.