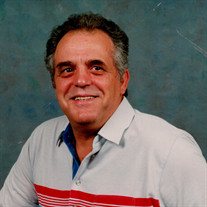 Leonard Neal Niday, 73 of Huntington, W.Va. passed away, Friday, January 6, 2016 in St. Mary's Medical Center. He was born February 21, 1943 in Huntington, W.Va. the son of the late, Addison Glen and Catherine Carrie Willis Niday. He was a retired... View Obituary & Service Information

The family of Leonard Neal Niday created this Life Tributes page to make it easy to share your memories.

Send flowers to the Niday family.