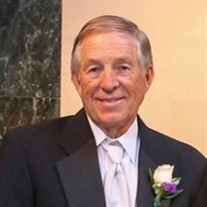 Larry Willie Bell of Barboursville, West Virginia and Stuart, Florida passed away on December 3, 2021 in the VA Medical Center, West Palm Beach, Florida. Larry was born on April 26, 1940 in Logan, West Virginia to Willie and Eva Tye Bell. In addition to his parents, he was preceded in death by a sister, Wilma Honaker, a brother, Donnie Bell, a niece, Jackie Bell, and special friends Herb Robertson, Jack O’Dell, and Bob Morris. He is survived by his wife of 59 years, Maudie “Sue” Ross Bell; three daughters, Kristen (Paul) Colozzo, Shannon Leonhart, and Jodi (Chris) Zimmerman; grandchildren, Chase Legleitner (fiance Mary Kate Jarrell), Cole Legleitner (girlfriend Ashley Tomkins), Chandler Legleitner (girlfriend Lucy Dodd), Jensyn Leonhart (boyfriend Joshua Shapiro), Haiden Leonhart, Grayson Jarrell, Graham Jarrell, Jake (Emily and Elizabeth Jo) Zimmerman, and Caitlyn Zimmerman; brothers, Jack Bell and Eddie (Vickie) Bell; sisters, Betty Barcus, Doris Krieger, Alice (Ted) Triplett, Ollie Mae (Mike) Dailey, and Nellie Gae (Larry) Adkins; and several nieces and nephews. Additionally, he is survived by former son-in-law, Scott Leonhart, with whom he was close and who was with him, along with his oldest daughter, Kristen, when he passed. Larry graduated from Hamlin High School in 1958 and served in the United States Air Force, stationed in Goldsboro, North Carolina, from 1962 to 1966. He was a member of Minerva Lodge #13 in Barboursville. He worked at Owens-Illinois in Huntington, West Virginia and Lakeland, Florida, where he was a mold maker for 34 years, until his retirement in 2000. He rarely missed work and was very proud of the many “perfect attendance” awards that he received. Larry loved spending his summers in Barboursville, West Virginia and his winters in Stuart, Florida and had many friends in both locations. He enjoyed watching local youth and high school athletic events and Marshall Football and spending time with his brother, Eddie, on the farm where he was raised. His greatest joy was his grandchildren, to whom he was a loving and supportive “Papa,” and he was beyond excited for the impending arrival of his first great grandchild, Collins Ann Legleitner, who is due to arrive in February, 2022. A military graveside service, officiated by Bishop E.S. Harper, will be held at Rosemont Memorial Gardens in Huntington, WV on Saturday, December 11, 2021 at 1:00 PM. Upon Larry’s wishes, there will be no visitation. In lieu of flowers, please make a donation to a charity of your choice. Henson & Kitchen Mortuary, Huntington, WV is caring for the family. Online condolences and memories may be shared by visiting www.hensonandkitchen.com

The family of Larry Willie Bell created this Life Tributes page to make it easy to share your memories.

Send flowers to the Bell family.