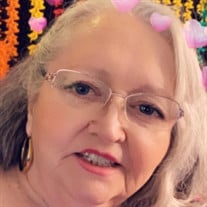 On May 2, 2021 Karen Virginia Lane, 71 of Huntington, our precious mother, grandmother and great-grandmother joined the Heavenly Choir. A true blessing to so many lives. She is preceded in death by her mother Glenna Virginia Berry Ross. Her father William Jennings Ross. Three brothers Harry Stanford Ross, Jimmy Dale Ross, William Michael Ross. She is survived by four sisters. Ferrol Lee Cotton of Huntington, Selena Mable Maynard of Huntington, Francis Joann Duncan of Lesage, Judith Kay Adkins of Huntington. One daughter Tina Shawn Fenney (Rich)of Culloden. Three sons Larry Todd Brumfield of Ashton, Joseph Craig Brumfield (Meggan) of Lesage, Travis Edward Adkins (Kayla) of Huntington. 9 grandchildren Larry Todd Brumfield Jr. of Huntington. Brittany Megan Winters (Zack)of Lesage. Joseph Craig Brumfield Jr. of Huntington, Chelsey Brooke Runyon (Zac) of Proctorville, Ryan Hall (Taylor) of Huntington, Travis Edward Adkins II of Huntington, Jennings Kessell Brumfield of Lesage. Brianna Nicole Dituro (Dylan) Of Milton, Richard Brandon Fenney(Sarah) of Proctorville. 5 great grandchildren. Elivia Shyanne Winters, Finnegan Cove Runyon, Evelyn Raine Runyon, Aubry Dare Fenney, Delylah Virginia Nicole Armstrong (Ginny). And a host of adopted children, aunts, uncles, nieces, nephews, cousins and special friends. She started singing at the very young age of 5. She was the apple of her daddy’s eye. He would place her on the altar at church to sing and sing she did. 66 years of singing in church with family and friends. Music was her life. She wrote and recorded several beautiful songs over the years. She enjoyed Crocheting and was always making things for her kids, grandkids, family and friends. She had a heart of Gold and helped so many over the years. She would give you the shirt off of her back and made sure you never went hungry. A true blessing from above. She is rejoicing in Heavens choir with the Angels. She will be so greatly missed. Funeral services will be Thursday, May 6, 2021, 12:00pm at Henson & Kitchen Mortuary, Huntington. Burial to follow at White Chapel Memorial Gardens, Barboursville. The family will receive friends on Wednesday, from 5:00-7:00 PM at Henson & Kitchen Mortuary, Huntington. Online condolences and memories may be shared with the family by visiting www.hensonandkitchen.com

On May 2, 2021 Karen Virginia Lane, 71 of Huntington, our precious mother, grandmother and great-grandmother joined the Heavenly Choir. A true blessing to so many lives. She is preceded in death by her mother Glenna Virginia Berry Ross. Her... View Obituary & Service Information

The family of Karen Virginia Lane created this Life Tributes page to make it easy to share your memories.

Send flowers to the Lane family.