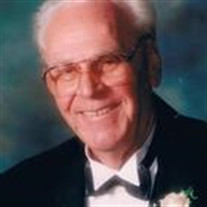 Julian Shawver “J.S.” Gravely, Jr., 95 of Ona, WV, passed away Friday, April 4, 2014 at Midland Meadows Senior Living. He was born March 23, 1919 in Besoco, WV, the son of the late Julian Shawver. Sr. and  Alvonia (Riddick) Gravely.  In addition to his parents he was also preceded in death in 2009 by his loving wife, Blanche Ann Webb Gravely and one sister, Elizabeth Gravely Walls. He was a retired Train Engineer for the Virginian Railway, later known as the Norfolk and Western Railway, a member of Bates Memorial Presbyterian Church and a WWII. U.S. Army Veteran.  Reflecting on his sense of humor, In his early years he played the drums in both a dance band and his high school marching band in which the director was the same. One grading period in marching band he received a B. The next day while playing the drums in dance band, the director asked JS why he was playing off beat and JS replied, "I was playing a B’s worth."  He is survived by one daughter, Jennifer Lynn Barton, and husband Harvey of Huntington, WV; one sister, Julia Lipscomb 102 soon to be 103 in May of 2014 of Roanoke, VA; grandchildren: Autumn Conley and husband Jon of Ona, WV, Brooke Merlino, husband Erik, of Huntington, WV, Paul Barton of Huntington, WV and Melissa Smith and husband Clay of Lynchburg, VA; great grandchildren; Spencer, Payton and Reagan Conley, and Quinn Merlino and Emma Kathryn and Isaiah Smith. Funeral services will be conducted at 11:00 AM on Wednesday, April 9, 2014 at Henson & Kitchen Mortuary, Barboursville, WV with Dr. Clay Smith officiating. Burial will follow in Blueridge Memorial Gardens in Prosperity, WV.  The family will receive friends from 6-8 PM on Tuesday, April 8, 2014  at Henson & Kitchen Mortuary, Barboursville, WV. Online condolences and memories may be shared with the family by visiting www.hensonmortuary.com .

The family of Julian Gravely created this Life Tributes page to make it easy to share your memories.

Send flowers to the Gravely family.