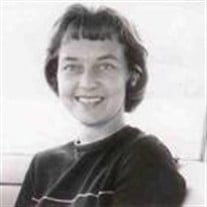 Judith Frances Peters Phillips, 78 of Barboursville, W.Va. passed away, Thursday, July 31, 2014 at the Emogene Dolin Jones Hospice House, Huntington, W.Va. She was born June 5, 1936 in Kenova, W.Va. the daughter of the late, Francis and Evelyn Clarkson Peters.  In addition to her parents she was also preceded in death by one brother, James Marvin Peters. She was a graduate of Ceredo-Kenova High School, formerly employed at Georges Cleaners in Barboursville and was expert seamstress during her lifetime who was also very skilled at Crafts. She is survived by her husband, Robert Phillips of Barboursville, W.Va.; her children, LeeAnn Massey (Henry) of Pollock, LA, Aaron Scott Phillips of Athens, GA, Deanea Pettie (Jim) of Highpoint, NC, Rhonda Gittis (Steven) of Greensboro, NC; nine grandchildren, Kelly Griggs, Stephany Nolen, Andrew and Grant Phillips, Sam, Natalie and Phoebe Gittis, Kyndall and Jillian Pettie; five great-grandchildren. Judith leaves behind more friends than can be counted. Visitation will be from 5-7 PM on Saturday, Aug 2, 2014 at  Henson & Kitchen Mortuary, Huntington, W.Va. near Barboursville.  Graveside services will be conducted at 2:00 PM on Sunday, Aug 3, 2014 at Ridgelawn Abbey of Devotion Mausoleum with Rev. Robert Johnson officiating. Burial will follow.  In lieu of flowers, the family requests memorial donations be made to the Emogene Dolin Jones Hospice House of Huntington.  They were there in our time and of need and they are very much appreciated. Online condolences and memories may be shared with the family by visiting www.hensonmortuaryt.com .

The family of Judith Phillips created this Life Tributes page to make it easy to share your memories.

Send flowers to the Phillips family.