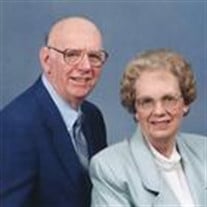 Jean Ann Iseley George, 86, passed away on February 28, 2014 in the presence of her family at St. Mary’s Medical Center in Huntington, WV after a month long illness. She was born on July 15, 1927 in Huntington. Her father was Paul Holt Iseley of Burlington, North Carolina and her mother was Faye Gank Iseley of Cumberland, Maryland. She was preceded in death by her parents and her husband, R. Wayne George, in 2011, and sister, Joan Iseley Crandall, of Xenia, Ohio, in 2009.  Jean spent her early childhood in Cumberland where her father was a locomotive inspector for the Baltimore & Ohio Railroad. The family returned to Huntington in 1939 where her father became Superintendent of Locomotives for the Chesapeake & Ohio Railroad. Jean graduated from Huntington East High School in 1944. Jean came from a family of railroaders and educators. Her great-grandfather, the Rev. Alfred A. Iseley, was a founder of Elon University in North Carolina. Other family members subsequently served as the presidents of Elon, Dennison University and West Virginia University. This family heritage inspired Jean to pursue a career in education and she received a B.S. in Education from Marshall College (now University) in 1948 and a Master of Arts in Education from Marshall in 1953. Jean taught at the elementary and junior high school level in the public schools of Logan and Cabell Counties, WV and the city school systems of Ironton and Norwood, Ohio. In 1948, her first teaching position was at Man Junior High School in Logan County. She constantly struggled that year in Man to convince her male students not to drop out of school at age 16 and take jobs in the coal mines, but instead, to remain in school and complete their education. In 1949, Jean accepted an appointment at Barkers Ridge Elementary School near Milton, WV, then one of the last one-room school houses in Cabell County. For three years, she taught 20 to 25 students in grades one through six with only the assistance of a part-time school cook. Teaching at Barkers Ridge was one of the most memorable and rewarding experiences of her life. On December 30, 1951, Jean married R. Wayne George of Huntington. They moved to Cincinnati, Ohio where Wayne worked as an engineer for General Electric Company and Jean taught in the city schools of Norwood, Ohio. While in Cincinnati, Wayne and Jean had two sons, Larry in 1954, and Doug in 1957. The family returned to Huntington in 1958 when Wayne accepted a position as an industrial engineer at the International Nickel Company (INCO). Wayne retired from INCO in 1987 and they remained in Huntington. Jean was a member of the Pea Ridge United Methodist Church for over fifty years. She sang in the Church choir for over twenty-five years, served as the Church’s historian and on the Church’s Administrative Board for many years. She assisted with the Church’s Boy Scout Troop 62 and encouraged both her sons in becoming Eagle Scouts. Jean was an active member of the Huntington Buford chapter of the Daughters of the American Revolution until her death. With her husband, she was an enthusiastic supporter of Marshall University football and basketball and attended MU basketball games until the last year of her life. Surviving Jean are her two sons, Larry W. George of Charleston, WV, and Douglas E. George of Huntington, WV, nephew, David Crandall, D.D.S. of Xenia, Ohio, and niece, Jan Crandall of Cincinnati, Ohio, and humourous cousins in North Carolina and elsewhere. Funeral service will be Wednesday, March 5th at 11:00 a.m. at the Pea Ridge United Methodist Church, Huntington, followed by internment at Spring Hill Cemetery. Visitation will start at 10:30 a.m. before the service. In lieu of flowers, the family requests that donations be made in her memory to the Marshal University Foundation, Inc. at 519 John Marshall Drive, Huntington, WV 25703. Henson & Kitchen Mortuary, Barboursville, is in charge of arrangements. Online condolences and memories may be shared with the family by visiting www.hensonmortuary.com.

Jean Ann Iseley George, 86, passed away on February 28, 2014 in the presence of her family at St. Mary&#8217;s Medical Center in Huntington, WV after a month long illness. She was born on July 15, 1927 in Huntington. Her father was Paul Holt... View Obituary & Service Information

The family of Jean Ann George created this Life Tributes page to make it easy to share your memories.

Send flowers to the George family.