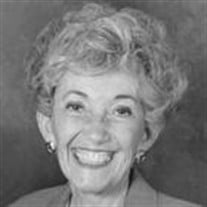 Jane Whittington Herndon, passed away on September 27, 2015 in Huntington, WV of natural causes. She was 86. Born in Roanoke, Virginia, Jane Herndon graduated from Natural Bridge High School, and subsequently attended Virginia Polytechnic Institute (now Virginia Tech) where she was a member of the Virginia Players and graduated with a degree in Biology in 1951. At the time, she was one of only 50 women at the university and the only woman in the Pre-Med program.She was very active in the Huntington community, including many years with the Junior League, Garden Club, Women’s Club and the Cabell County Bar Auxiliary. In 1971, she was installed as President of the National Lawyers Wives in London, and later sat on the Executive Committee of the World Peace Through Law Center’s Conference in Belgrade, Yugoslavia.  She chaired the Galleries Ball fundraiser many years for the Huntington Museum of Art to which she and her husband were patrons. Jane Herndon was a long-standing member of First Presbyterian Church in Huntington. She will be remembered by all as someone who enjoyed life to the fullest and received others with a warm smile and kind words.  One of her greatest joys was playing the lead role in "Driving Miss Daisy" with the Kanawha Players of Charleston, WV in 1993.She was preceded in death by her husband of 64 years, Milton T. Herndon, and her sisters Anne Whittington Sjogren and Ruth Whittington Reed and her brother David K. Whittington.Mrs. Herndon is survived by her children: Dr. Deborah D. Herndon, Dr. M. Boyd Herndon, Marion Herndon Fuqua and Thomas K. Herndon; her brother and sister living in Virginia; eight grandchildren and five great grandchildren. The Herndon family will receive friends on Friday, October 2, 2015 at the First Presbyterian Church in Huntington beginning at 2:30 PM until 3:30 PM. Funeral Service will begin at 3:30 PM at the church. Burial and graveside services will be conducted on Saturday, October 3, 2015 at 1:30 PM at Evergreen Cemetery in Roanoke, VA. In lieu of flowers, the family requests that donations may be made in her memory to the Alzheimer’s Association, West Virginia Chapter, in Charleston, WV. Online condolences may be shared with the family by visiting www.hensonandkitchen.com .

The family of Jane W. Herndon created this Life Tributes page to make it easy to share your memories.

Send flowers to the Herndon family.