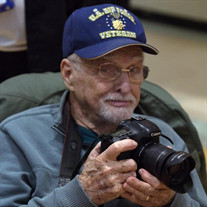 James Edward “Papa” Parsons died Friday, April 30th at St. Mary’s Medical Center after complications from Covid-19. He was preceded in death by his wife, Doris G. Parsons, daughter Deborah L. Parsons, and sisters Mary Lou Parsons and Carol Anne Moore. James was born on January 16, 1930 in Huntington WV to the late Louis B. and Louise Pollard Parsons. He attended Huntington High School, where he played football, basketball, and ran track for legendary Coach Ray McCoy, forming life-long friendships. He was a proud U.S. Air Force veteran, having served during the Korean War. Aviation was a life-long interest and as a civilian, he earned his pilot license. At the age of 55, Jim retired from Huntington’s International Nickel Company (INCO), where he was the Head Foreman of the Vacuum Melt Refinery. Jim and Doris enjoyed retirement and traveled to many places, wintering in Florida and Hawaii. Jim almost never missed the daily meeting of the ROMEO Club (Retired Old Men Eating Out) and you could always find him at McDonalds in the morning. We are grateful for the devoted friends he made in this group. An avid sports photographer, Jim was the official “M Club” photographer for Marshall University and was inducted as a life-time member. It was the track and cross country teams at Cabell Midland that lovingly gave him the nickname “Papa”, and he often attributed his youthfulness to being involved with these athletes and their families. Survivors include two sons, James E. “Rusty” Parsons II (Cheryl) and Chris Parsons (Kim), 4 granddaughters, Jennifer Parsons, Kelly Parsons Jarvis (Adam), Candice Parsons, Jessalyn Parsons Hatfield (Cole), 2 great grandsons, Caleb James Parsons and Kendrick Hatfield, a sister, Linda Lafon, and a brother Tim Parsons (Sandra) along with many other relatives and close friends. He also leaves behind his dog and constant companion, Katie. While Jim may have meant much to many people, to his family, he was our center. He made life easier for all of us. His favorite Bible verse was James 2:14-26, “Faith without Works is dead.” There are countless examples of how he exemplified this, helping family, friends, and often total strangers. In lieu of flowers, the family requests that you honor him by doing something kind and unexpected for someone else. If you knew Jim, you probably heard a few of the many stories he liked to tell. It is now time for us to tell his story, a story of 91 years of a life well lived. We hope you will join us for a Celebration of Life to take place at New Life Church on Sunday, May 23rd at 2:30 p.m. Pastor Josh Huffman, a former Cabell Midland track athlete, will officiate the service. Henson & Kitchen Mortuary is handling the arrangements. in lieu of flowers, the family requests that you honor him by doing something kind and unexpected for someone else.

The family of James "Papa" Parsons created this Life Tributes page to make it easy to share your memories.

Send flowers to the Parsons family.