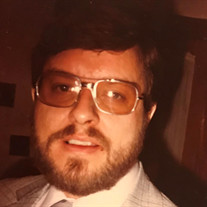 James Russell Martin, age 69, died February 4, 2018 in Johnson City, Tennessee. Jim was born December 18, 1948 in Ona, WV. He was the sixth born child of Clarence and Ollie Martin. He was preceded in death by his parents and his beloved sister Doris Lambert and brother Johnny Martin. He is survived by his wife of 41 years, Karen, and his two children, Susan and Michael, both of whom he was fiercely proud. He is also survived by his sisters, Velma Clonch and Karen (Jim) Leach, and his brothers, Bob Martin, Larry (Linda) Martin, Bill (Ada) Martin, and Clarence (Sharon) Martin, his brother-in-law Henry Lambert, and many nieces, nephews, and cousins. He is also survived by “his” Laura and his honorary grandchildren, Jocee and Stewart Blair. Finally, he is survived by a huge extended family, including the family he married into and countless friends of his kids, who always knew they were welcome in his home. He was a veteran of the US Army and retired from the VA. He also worked for a number of years at Paul B Hall Medical Center. However, the job he enjoyed the most was being Santa Claus. He enjoyed working with young people, and at different times in his life was a Boy Scout leader, band Dad, and chaperone for any trip his kids went on. Jim accepted Christ as his Savior as a young man and was always active in church no matter where he lived at the time, whether it was by working in the children’s ministry, being song leader, or just being the man singing the loudest in the pews. He believed in making a joyful noise and was always more than happy to sing a song or ten. He made friends wherever he was, and leaves behind a legacy of laughter and love, which will continue as we all share stories of him. Jim also loved his animals, almost all of whom were strays. In lieu of flowers, the family requests that donations be made to your local animal shelter. Funeral services will be conducted at 11:00 AM on Friday, February 9, 2018 at Henson & Kitchen Mortuary, Huntington, WV near Barboursville with Brent Gibson and Bill Wilson officiating. The family will receive friends from 6-8 PM on Thursday, February 8, 2018 at Henson & Kitchen Mortuary. Online condolences and memories may be shared with the family by visiting www.hensonandkitchen.com .

James Russell Martin, age 69, died February 4, 2018 in Johnson City, Tennessee. Jim was born December 18, 1948 in Ona, WV. He was the sixth born child of Clarence and Ollie Martin. He was preceded in death by his parents and his beloved sister... View Obituary & Service Information

The family of James Russell Martin created this Life Tributes page to make it easy to share your memories.

Send flowers to the Martin family.