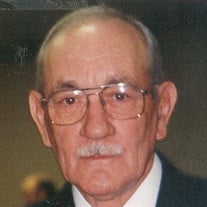 Howard Lovejoy, 90, of Huntington, W.Va., passed away peacefully on June 8, 2018 at Paramount Midland Meadows. He was born on October 30, 1927 in Lincoln County, W.Va. to Ray and Belle (Spears) Lovejoy, both of whom preceded him in death. Also predeceasing him were his wife of 67 years, Agnes Richmond Lovejoy, and his sisters, Virginia Lovejoy, Eutha Scragg and Thelma Miller. He is survived by his sons, Stephen (Joan) Lovejoy and Gary (David) Lovejoy, two grandchildren, Chad (Sara) Lovejoy and Stephanie (Travis) Beaman, and ten great-grandchildren, Kaitlin Lovejoy, Reagan Hamilton, Luke Lovejoy, Mason Hamilton, Ethan Lovejoy, Gabe Beaman, Dylan Lovejoy, Parker Beaman, Colby Beaman and Haven Beaman. He is also survived by his sisters, Eunice Adkins, Joann Sowards Tompkins and Loretta (Silas) Adkins, along with numerous nieces and nephews and his close friend, Tom Baldwin. He was a veteran of the United States Army in World War II, after which he graduated from Marshall University on the G.I. Bill. Having also worked in construction for his father in law, J.H. Richmond, he made a career as a West Virginia educator, retiring as the principal of Hurricane High School. He was an avid outdoorsman who loved to hunt and fish in the West Virginia woods. He served many years as Scoutmaster of Boy Scout Troop 700. Special thanks to the staff and to Ms. Amy at Paramount Midland Meadows for their special care and kindness. Funeral services will be conducted at 1:00 PM on Wednesday, June 13, 2018 at Henson and Kitchen Mortuary, East Pea Ridge Road, Huntington, WV. with Pastor Brady Lipscomb officiating. Burial will follow in Oaklawn Cemetery, Huntington, WV. with military honors provided by American Legion Post #139 Milton, WV. The family will receive friends from 11:00 AM until service time on Wednesday at Henson and Kitchen Mortuary. Online condolences and memories may be shared with the family by visiting. www.hensonandkitchen.com.

Howard Lovejoy, 90, of Huntington, W.Va., passed away peacefully on June 8, 2018 at Paramount Midland Meadows. He was born on October 30, 1927 in Lincoln County, W.Va. to Ray and Belle (Spears) Lovejoy, both of whom preceded him in death. Also... View Obituary & Service Information

The family of Howard Lovejoy created this Life Tributes page to make it easy to share your memories.

Send flowers to the Lovejoy family.