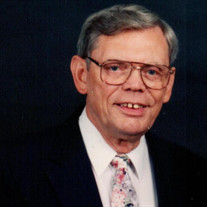 Homer C. Miller, 91 of Huntington, W.Va. passed away, Sunday, July 16, 2017 at the Woodlands Retirement Community. Homer was born March 28, 1926 in Mason County, W.Va. the son of the late Charles and LuVada Lewis Miller. In addition to his parents, he was also was preceded in death by his three brothers, Bill Charlie and Lloyd Miller. He is survived by his wife of sixty-five years, Mary; three children, Carol MacCourtney (Kane), Wayne Miller (Johnna) and David Miller (Pam); four grandchildren, Lauren Miller (Rob), Brian Miller, Kelsey MacCourtney and Christian MacCourtney; three great-grandchildren and his sister, Hazel Watkins. Homer was a proud and decorated U.S. Navy Yeoman Veteran having served in the South Pacific during World War II. He was later employed at C&O Railroad as a machinist and Houdaille Industries as a Millwright. Homer was a member of the Odd Fellows and was a Mason. As a Shriner, he regularly drove needy patients to the Shiners’ Hospital for Children in Lexington, KY. His greatest passion was his devotion and membership at Cross Roads United Methodist Church where he and Mary humbly as dedicated and faithful members for many years, holding many leadership positions. Funeral services will be conducted at 1:00 PM at Cross Roads United Methodist Church on Wednesday, July 19, 2017. Entombment will follow in White Chapel Memorial Gardens, Barboursville, W.Va. with Military honors provided by American Legion Post #139 Milton, W.Va. The family will receive friends from 11:30 AM until service time on Wednesday at the church. The family would like to thank Homer’s special caregivers, Laura and Lydia for taking excellent care of him at the Woodlands Health Care. Also thank you to Sharon, Tammy, Dawn, Jada, Rhonda, Kimberly, Nicole and other staff members who took such diligent care of him. We are very grateful to have had their services. In lieu of flowers, memorial donations may be made in Homer’s Memory to Cross Roads United Methodist Church, 3146 Saltwell Rd. Huntington, W.Va. 25705. Henson and Kitchen Mortuary, Huntington, W.Va. is caring for the family. Online condolences and memories may be shared with the family by visiting www.hensonandkitchen.com .

Homer C. Miller, 91 of Huntington, W.Va. passed away, Sunday, July 16, 2017 at the Woodlands Retirement Community. Homer was born March 28, 1926 in Mason County, W.Va. the son of the late Charles and LuVada Lewis Miller. In addition to his parents,... View Obituary & Service Information

The family of Homer C. Miller created this Life Tributes page to make it easy to share your memories.

Send flowers to the Miller family.