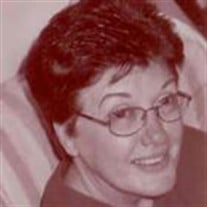 Gloria Belle Jackson Smith, 69, of Barboursville, W.Va. went home to be with the Lord after a long illness on Tuesday, October 14, 2014 at the Emogene Dolin Jones Hospice House, Huntington, W.Va. She was born July 22, 1945 in Blanchard, OK. the daughter of the late, Jasper and Daisy Marie Flippo Jackson. In addition to her parents, she was also preceded in death by her sister, Delma Bowles and brothers, Fred, Cotton, Ed and Dale Jackson. Gloria met and married her husband, Sam Smith in Amarillo, TX. while he was in the U.S. Air Force in 1963. The Air Force transferred them to Dayton, OH in 1963 and they lived there until 1981. In 1981 they moved to Charleston, W.Va. to open the first McDonalds Restaurant. During their eighteen years in Charleston together they owned and operated nine McDonalds Resturants. In 1999, they sold their resturaunts and moved to Huntington, W.Va. where they owned and operated eight Blockbuster Video Stores in the tri-state area until 2011. Gloria was a member of Christ Temple Church in Huntington, W.Va. She is survived by her loving husband of 51 years, Sam Smith; her three sons and daughter-in-laws, Robert and Kovine Smith, of Hurricane, W.Va. Daniel and Marlene Smith of Scott Depot, W.Va. and Timothy Smith of Huntington, W.Va; three grandchildren, Kolina, Ava and Nate; one sister, Peggy Arnold of Dayton, OH; brothers, Benny Jackson of Amarillo, TX and Carey Jackson of Oklahoma City, OK. A memorial service honoring Gloria’s life will be conducted at 6:00 PM on Friday, October 17, 2014 at Henson & Kitchen Mortuary, Barboursville, W.Va. with Pastor Keith Watters officiating. Online condolences and memories may be shared with the family by visiting www.hensonmortuary.com.

Gloria Belle Jackson Smith, 69, of Barboursville, W.Va. went home to be with the Lord after a long illness on Tuesday, October 14, 2014 at the Emogene Dolin Jones Hospice House, Huntington, W.Va. She was born July 22, 1945 in Blanchard, OK.... View Obituary & Service Information

The family of Gloria Belle Smith created this Life Tributes page to make it easy to share your memories.

Send flowers to the Smith family.