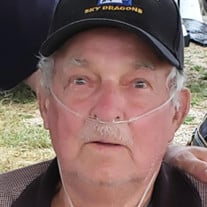 Peacefully on Christmas Eve 2019, George H. Cart (also known as Junior), 80 years old, of Culloden, WV took his final breaths in this world and made his flight home to glory. George was a proud veteran and served the United States Army in the 82nd Airborne Division out of Fort Bragg, North Carolina. He was a lifetime member of the American Legion in Milton, WV and the local Airborne groups. George was born on May 29, 1939 in Huntington, WV. Preceding him in death were his parents, George Herbert and Weltha Swan Cart, and his infant sister, Lucy Jane Cart. He was raised on the family farm with his sister, Betty Carolyn, who survives him along with her husband David Booten of Huntington, WV. He is also survived by daughter and son in law, Rhonda and Mark Dalyai of Hurricane, WV, and son and daughter in law, John and Janice Cart of Phoenix, AZ. Rhonda and John were born from his first marriage. Another son and namesake, George H. Cart, III was born from his second marriage. His grandchildren are Tawny Claudio (husband Billy) of Phoenix, AZ, Ryan Cart of Phoenix, AZ, Micah Buck of Richmond, VA, Bethany Cart of Phoenix, AZ, and Jonah Cart of Culloden, WV. Granddaughter Olivia Cart preceded him to heaven in 2017. He has one great granddaughter, Presley Claudio also of Phoenix, AZ. He is also survived by special nephews, Bob Booten (wife Teri) and Andy Booten (wife Lisa) and great nephews. Finally, he is survived by Janet Wilson of Culloden who was his companion for many years and loved him dearly. After serving in the military, George worked at American Car Foundry (ACF) Industries where he medically retired. He continued to be active in the local American Legion and owned and operated a small but yummy kettle corn business serving local fairs and festivals in the tri-state area and Virginia. Mostly, George liked to be on his farm. He loved to tinker. He loved sunsets. He loved working on cars, welding, and being on a tractor, mower, or really anything with a motor. George may have been seen driving down the road in the snow with his two oldest children gleefully clinging to makeshift sleds on ropes with a car he pieced together without the car’s body attached to the frame. George was a simple man with a big heart. He liked to drive slowly and smell the heirloom roses planted by his mother beside the farmhouse. He looked forward to fall and the Milton Pumpkin Festival where he served on the board. He was also a prankster and enjoyed laughing, although sometimes, at another’s expense. He made a practice of bossing and giving sage advice. One time, George was instructing his namesake boy about the dangers of chains and mowers and the proper technique to avoid getting your finger chopped off. A priceless example to both the young son and some of the town as he drove to the farm with his hand out of the window and wrapped in a white shirt due to chopping off the end of his finger. He enjoyed old stuff, flea markets, and junk. He bonded with veterans, was a friend to the friendless, and thoroughly enjoyed secretly blessing others. He liked to watch Wheel of Fortune, Jeopardy, Fox News, especially Tucker Carlson, and he looked forward to reading the paper every day. He enjoyed reading the classics, quoting classical poets like Tennyson, and encouraging his children to learn. In his younger days, he was an exceptional marksman and a proud parachutist. (Who wouldn’t want to jump out of a perfectly good plane!) Most importantly, George decided to anchor his life in Christ as a young man at Union Baptist Church in Milton, WV. Though he faltered and failed in his journey over the years, he knew the Anchor of his soul and found great comfort in the peace that Christ provides especially as his health declined. Funeral services will be conducted on Saturday, December 28, 2019 at Henson and Kitchen Mortuary located at 6357 E. Pea Ridge Road, Huntington, WV 25705. Visitation will be from 12:00-2:00pm with services conducted at 2:00pm with Pastor Travis Rucker of Good Shepherd Baptist Church in Scott Depot, WV officiating. Music will be provided by Victoria Warner of Amherst, VA. A graveside service will be held at Milton Cemetery with military honors immediately following the service. The family would like to thank the Hershel Woody Williams VA Medical Center, the Emogene Dolin Jones Hospice House of Huntington, WV and the many friends who have faithfully assisted in providing transportation, cheer, support, help, and love throughout George’s life. In lieu of flowers, the family encourages a donation to a local veteran group such as the Disabled American Veterans (DAV) or American Legion Post 139. Always, George would be happy knowing you were kind and generous to someone in need. Online condolences may be shared with the family by visiting www.hensonandkitchen.com.

Peacefully on Christmas Eve 2019, George H. Cart (also known as Junior), 80 years old, of Culloden, WV took his final breaths in this world and made his flight home to glory. George was a proud veteran and served the United States Army in the... View Obituary & Service Information

The family of George Herbert Cart created this Life Tributes page to make it easy to share your memories.

Send flowers to the Cart family.