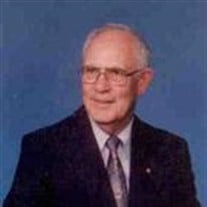 Donald Dewitt Haddox 91 of Raceland, KY. passed away, Wednesday, April 08, 2015 at the Wyngate Senior Living Community, Barboursville, W.Va. He was born August 23, 1923 in Big Springs W.Va. the son of the late, Clarence Dewitt and Della Alice Snider Haddox. He was the second youngest of ten children. He was the widower of Edit Dawson Haddox to whom he was married for fifty-four years. He served in the U.S. Navy in the Pacific during World War II. Where he was wounded and was decorated for his service. He joined the Army Corps of Engineers and served for thirty plus years, retiring as the Lock Master of the Greenup Locks and Dam. He was a member of Grace United Methodist Church in Raceland, KY. In addition to Edith and his parents, he was preceeded in death by all of his nine brothers and sisters, Violet Hosey, Darest Glen Haddox, Thelma Caroline Fox, Johnnie Haddox, Pearl Clayton Wright, Lillian McMillin, Amanda “Mandy” Fike, Naomi Fay Haddox and Faith Jones. Survivors include his son, Donald R. Haddox and his wife, Becky of Huntington, W.Va; grandchildren, Clifford Haddox and his wife, Emily, Craig Haddox and his wife, Michelle and Caroline Roma and her husband, Aaron. His later years were made happier and livelier by the arrival of seven great-grandchildren, Madeline and Jonah Haddox, Brooke, Dawson, Kailyn, Paxton, Summer and Shawn Haddox, and Capri, Dante and Nico Roma. He is also survived by many beloved nieces, nephews and friends. The family would like to say “Thank You” to all the staff at Wyngate who took very good care of him in his last month, the neighbors who have always been so helpful, to Pastor Phillip Nunley and all of his friends at Grace Memorial, to his housekeeper and friend, Vicki Harris and to all the waitresses who became like family to him over the years at Ponderosa and Golden Corral. Funeral services will be conducted at 1:00 PM on Saturday, April 11, 2015 at Henson & Kitchen Mortuary; Barboursville, W.Va. Interment will follow in Ridgelawn Memorial Park, Huntington, W.Va. Visitation will be from noon until service time on Saturday at the mortuary.  A memorial service honoring his life will also be conducted at a later date at the Grace Memorial Methodist Church in Raceland, KY, his hometown for the past forty years. I lieu of flowers, memorial donations may be made to Grace Memorial Methodist United Church, P.O. Box 6958 Raceland, KY 41169. Online condolences and memories may be shared with the family by visiting www.hensonmortuary.com .

The family of Donald Haddox created this Life Tributes page to make it easy to share your memories.

Send flowers to the Haddox family.