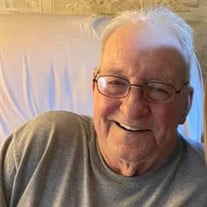 Donald Eugene Clark, age 72, was born December 29, 1948 the son of the late, Wallace and Irene Bowen Clark at his home town of Marmet where he later changed his home address to Hernshaw, WV and now to a Heavenly address on September 8, 2021 following a long illness. He is survived by his loving wife, Jeannie Edwards Clark of Hernshaw, WV and two sons, Patrick Clark and Nathan Clark (Julie); sisters, Phylis Carver of Harrisonville, MO; brothers Vernon Clark (Diane) Basehor, KS, Wallace Clark (Becky) of Marmet, WV; three grandchildren, Justin Clark, Jordan Clark and Tyler Clark. sister-in-laws, Taima Clark, Linda Clark, Shirley Clark, Connie Clark, Peggy Clark, Geri Clark, In addition to his parents, he was preceded in death by eight brothers, Frank (Josephine) Clark, Harold Clark, Ira Jack Clark, Emil Clark, James Clark, Charles Clark, William Clark, Roger Clark; one sister, Brenda (Robert) Fleming and one brother-in-law, Bob Carver. Donald had a ministry in song that won many lives to his Heavenly Father. He combined his singing talent with his close walk with God as he preached the gospel whenever he had the opportunity. Donald was a member of Chesapeake WV VFW Post # 8363. He was a Certified Electrician with UMW and worked at Carbon Fuel Coal Company, US Steel and Tony’s Branch Coal Company, Bloomingrose. Donald was multiple times Past Master of Salina Lodge #27, Malden, WV. He was initiated into the lodge February 23, 1981, passed March 19, 1981, and was raised April 6, 1981. Donald had a deep love and commitment to the Salina Lodge, he was a good ritualist, and spent his entire life coaching many successful Masonic candidates. He was also a member of the Scottish Rite. Donald loved all sports and excelled at most. When physical disabilities ended his days of playing sports, he used his knowledge and experience to become a football and baseball referee and coach. He refereed and coached little league and high school football and baseball throughout WV but he was especially proud of the years he spent as an assistant baseball coach at Capital High School. Far above all other sports, Donald’s first love was the game of golf. He always told his golf buddies he may not be very good at golf but he sure had a good time playing with them. Donald proudly told everyone he was going to graduate with a degree from WVU because he chose to donate his body there for medical science and research. Sadly, this dream was unfulfilled because current COVID restrictions prohibited him from being accepted by WVU. Donald was a proud Vietnam Veteran who loved his country and displayed the American flag and colors on his prosthetic leg. He suffered many years from illnesses caused by exposure to Agent Orange while serving time in the US Army in Vietnam. But his suffering ended September 8, 2021 as he entered into Gods loving arms through Heaven’s Gates singing everyone’s favorite song, “The Lighthouse”. Donald’s family would like to give thanks to his special caregiver, Marsha Fields Burdette, Village Caregiving, who he loved dearly. Marsha always had something funny and encouraging to say to cheer Donald on his bad days and they had many jokes to share while she provided his care. Also many thanks to the staff of Pulmonary Associates of Charleston who provided loving medical oversight to Donald’s care during his prolonged hospital stay. Special thanks to Bro. Tom Burnside, pastor of Marmet First Baptist Church, and Bro. Duane Priddy, pastor of Chesapeake Apostolic Church and family, for all the times you visited with and prayed for Donald. He loved you both and had the utmost confidence in your ministries. Donald's arrangements are in the care of Henson Kitchen Mortuary, 6357 East Pea Ridge Rd. Huntington, WV near Barboursville. His wishes were to be cremated. A private memorial service will be conducted and dedicated to Donald by the Chesapeake VFW Post # 8363. Online condolences, memories and video tributes may be viewed and shared with the family by visiting www.hensonandkitchen.com.

Donald Eugene Clark, age 72, was born December 29, 1948 the son of the late, Wallace and Irene Bowen Clark at his home town of Marmet where he later changed his home address to Hernshaw, WV and now to a Heavenly address on September 8, 2021... View Obituary & Service Information

The family of Donald Eugene Clark created this Life Tributes page to make it easy to share your memories.

Send flowers to the Clark family.