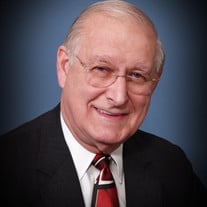 &#8220;If we each light one little candle, we can light the world.&#8221; ------ Priest Fulton J. Sheen, Motivational Speaker Clarence E. Martin went to his Lord and Savior on 8, January, 2020. He was born in Milton, West Virginia on February... View Obituary & Service Information

The family of Clarence Edward Martin created this Life Tributes page to make it easy to share your memories.

“If we each light one little candle, we can light the world.”...

Send flowers to the Martin family.