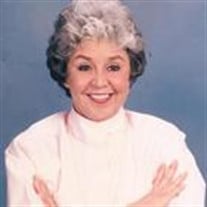 Barbara Meredith Jones, 72 of Huntington, WV, peacefully left her earthly home for her heavenly home on April 12m, 2014. After a short illness, she passed away surrounded by family and friends at the Emogene Dolin Jones Hospice House in Huntington, WV. she will be greatly missed by her husband, of Fifty years, G. Tracy Jones; a son, G. Tracy Jones, !!. of Richmond, VA, and his wife, Amy; a son, Troy M. Jones of Huntington, WV; and a daughter, Jennifer Jones Fazzolari of Cross Lanes, WV. She also leaves behind six grandchildren; Dominic, Foster, Brooke, Jay, Miles and Audrey, all of who loved her and will miss her greatly. Born in Alderson, WV, on July 17, 1941, Barbara was the first daughter after four sons and ultimately became the fifth of seven children. She grew up in St. Albans, WV, and graduated from St. Albans High School in 1959. She then went to and graduated from West Liberty College of Dental Hygiene and practiced   as a dental hygienist for more than thirty years in the Huntington, WV area. She has lived in Huntington for over fifty years. For many years she has been a member of the First United Methodist Church in Huntington, where she was also the Wedding Coordinator for several years.  Predeceased by her mother, Ruth Foster Meredith, and her father, Frank L. Meredith, Sr., both of St. Albans but formerly Alderson, WV; her eldest brother, Bill Meredith of Socorro, NM; and another brother, Ronald “Tags” Meredith of St. Albans.  She leaves behind two older brothers; Ted Meredith and his wife, Gerry of St. Albans; and Frank Meredith, III. And his wife, Susie of Parkersburg; and two younger sisters; Frances Meredith of Hurricane, WV; and Joan Meredith of Huntington, WV. she leaves behind numerous nieces, nephews, great nieces and nephews, and cousins all of whom live throughout the United States.  She leaves a maternal aunt , Christine F. Phipps of Huntington, WV. Barbara will be sorely missed by her lifelong friends, members of a group who called themselves The Stars: Besides Barbara, this included Sara “Shug” Miller, Beth Hensley Lucas, Joy Byrneside Peters, and Carolyn Nester Judy, all originally from St. Albans. The motto of this exclusive group  was “Been There, Done That”. Barbara loved her family, delighted especially in her grandchildren, and anything with a watermelon theme. Everyone who knew Barbara will understand.  Henson & Kitchen Mortuary, Barboursville, WV is in charge of the arrangements. Visitation will be on Tuesday, April 15, 2015 from 12:00 noon until 2:00 PM and Funeral services will commence at 2:00 PM at the First United Methodist Church , Huntington. Burial will follow in Oaklawn Memorial Park, Huntington. In lieu of flowers, the family requests donations be made to MAGIC Foundation, 6645 West North Avenue, Oak Park, IL 60302; or The First United Methodist Church, 1124 Fifth Ave. Huntington, WV or the Emogene Dolin Jones Hospice House, 3100 Staunton Avenue, Huntington, WV.  Online condolences and memories may be shared with the family by visiting www.hensonmortuary.com .

Barbara Meredith Jones, 72 of Huntington, WV, peacefully left her earthly home for her heavenly home on April 12m, 2014. After a short illness, she passed away surrounded by family and friends at the Emogene Dolin Jones Hospice House in Huntington,... View Obituary & Service Information

The family of Barbara Meredith Jones created this Life Tributes page to make it easy to share your memories.

Send flowers to the Jones family.