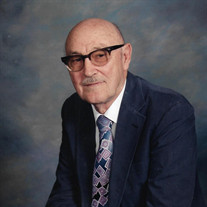 Asa “Cork” Carlton Eddy of Pfafftown, North Carolina died Tuesday, April 16, 2019 a day shy of his 95th birthday. He was born April 17, 1924 in Huntington, West Virginia to Ross and Olga “Pearl” Eddy. He was preceded in death by his wife, Helen Eddy; two sisters, Ruth Jean and Helen Henley (Lawson); two brothers, Jack (Jenny) and Jim; and two daughters, Jamie Spillers (Scott) and Kimberly Ashburn. He is survived by one brother, Larry (Donna); two sons, Steven Eddy (Caroline) and Jeffrey Longeddy (Deborah); one daughter, Debra Fletcher (Alan); many grandchildren, greatgrandchildren, nieces, nephews, cousins, and a host of friends. He served as Master Sergeant in the Signal Corps in Patton’s Third Army, where he received a Bronze Star and Purple Heart. He continued to serve his country in other significant capacities as a communications consultant after his retirement of 41 years as an Electrical Engineer with AT&T.Funeral services will be conducted at Henson and Kitchen Mortuary, 6357 E. Pea Ridge Road, Huntington on Saturday, May 4, 2019 at 11:00 AM with Pastor Don Walker officiating. Burial will follow at Spring Hill Cemetery, Huntington. The family will receive friends one hour prior to the services at the mortuary. To honor Mr. Eddy for his kind and generous spirit, please make donations to the charities of your choice in lieu of flowers. Online condolences and memories may be shared with the family by visiting www.hensonandkitchen.com

The family of Asa Carlton Eddy created this Life Tributes page to make it easy to share your memories.

Send flowers to the Eddy family.