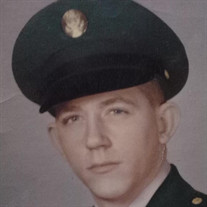 Alan Dale Taylor, 72 of Dunbar, WV passed away Wednesday, May16, 2018 in St. Albans following a lingering illness. Born April 22, 1946 in Williamson, WV to the late Emily Christine Smith Taylor-Hamer and Hershel Taylor. In addition to his parents, he was also preceded in death by one sister, Anita Diann and two brothers, Robert Lee and Wallace Duane Hamer. He is survived by one son, Alan Duane Taylor of Florida, one brother, Gary P. Hamer of Charleston, WV, one step-son, William Atwell of the home. Alan leaves behind several Aunts and Uncles and numerous cousins. Also special friends; Ethel Black, Ann R. Boyd and Joan Spears. Alan served in the U.S. Army from 1965-1968, after which he became a commercial truck driver, having been retired several years. Memorial services will be conducted at Donel C. Kinnard Memorial State Veterans Cemetery, Institute, WV, in the Pavilion, on June 14, 2018 at 2:00 p.m. with full Military Honors provided by the cemetery Honor Guard, to which the family would like to extend our sincere thanks. Also, a special thanks to Henson-Kitchen Mortuary of Huntington, WV, whom we have entrusted Alan’s services. www.hensonandkitchen.com

The family of Alan Dale Taylor created this Life Tributes page to make it easy to share your memories.

Send flowers to the Taylor family.